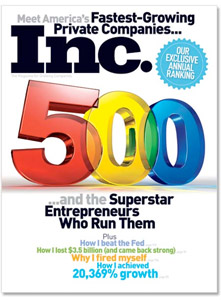 We are thrilled to announce that EmoryDay was recently named to the Inc. 500 List! The Inc. 500 is ranked according to percentage revenue growth from 2006 through 2009. To qualify, companies must have been founded and generating revenue by June 30, 2006. Additionally, they had to be based in the United States, privately held, for profit, and independent—not subsidiaries or divisions of other companies—as of December 31, 2009.

In 2006, EmoryDay generated $350,000 in revenue, and just three years later that figure jumped to $5 million. This growth came from a tremendous upsurge in the As Seen on TV market.

EmoryDay is unique in its approach to doing business. After years of commuting and traditional office environments, EmoryDay created a virtual company that supports employees and their families. This unique approach has helped the company attract some of the best experts in the business.