How Reinvesting Your Advertising Budget Can Grow Your Business 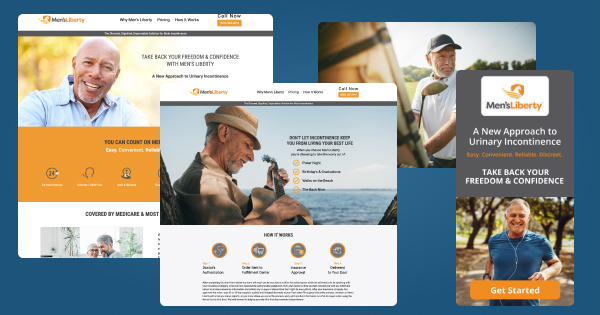 Men’s Liberty provides medical devices for men who suffer from incontinence; in a marketplace riddled with restrictions on healthcare advertising and insurance regulations. As such, they understand that the costs of advertising are generally a little higher than those of a more traditional product or service and have seen great success with television, print, and digital advertising.

As the digital landscape continues to become more competitive, the team at Men’s Liberty was looking for ways to reach a wider audience. For years, they have been growing their digital campaigns on Google, but they just weren’t seeing the results they needed from simply “raising the budget” once again and were looking to explore new possibilities.

The team at EmoryDay went to work developing a comprehensive omnichannel approach to advertising that allowed Men’s Liberty to better utilize their existing advertising budget but also explore channels where they previously did not have a presence, like Bing and Facebook.

On Google, we were able to dial in the campaign so much that the client averages 150–200 additional leads a month, on a smaller budget, from this platform alone. But the real impact came from Men’s Liberty choosing to use those savings and reinvest in new platforms. They’ve had more than 2,500 conversions come from Facebook & 400 from Bing, all from customers who otherwise wouldn’t have known they existed. Their blended cost per conversion was targeted at $150 per lead, but with the right optimizations and proper diversification, we were able to lower that to $50, both saving the Men’s Liberty team money and helping to grow their business.

No payments for 30 days, cancel anytime!

Schedule a Demo
Start for Free